With global population growth and a growing global economy, the amount of waste also increases in both residential and industrial areas. This means that the waste disposal industry is put under massive pressure, as untreated waste streams pose a significant risk to the health of the citizens and the environment as a whole. Improper treatment of waste, especially in connection with uncontrolled landfilling, causes various problems (e.g. pollution of drinking water, increased greenhouse gas emissions).

One way to tackle these problems is to use an integrated waste management system in which our core competencies and experience from the fields of "Power Sector" and "Circular Economy" go hand-in-hand.

In cooperation with our partners from India (MSc. Shivali Sugandh; Green Grahi), we have shown what this combination could look like and developed a model for optimizing waste-to-energy plants in India.

With our global partners and global network, we support you in the development and implementation of your waste-to-energy projects.

Optimization of Waste-to-Energy Plants in India

In this article, you can learn about 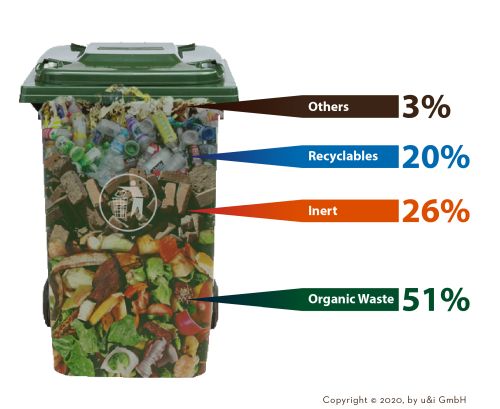 Figur 1: Composition of the waste in India

In India, this organic portion is inevitable in most cases because it is not collected separately. Dry materials such as plastics, paper or metals are sometimes of interest to informal collectors or "Kabadiwalas" and are often sold to informal recyclers before they are picked up via official channels. Since these originally dry recyclables are not collected separately, they often come into contact with organic waste, so that they become contaminated or so heavily soiled that the former recyclables ultimately become unusable and end up in the waste stream.

Therefore, the primary difficulty for facilities to treat this waste stream in India is primarily to deal with this highly mixed waste. This often leads to difficulties in the operation of the systems and, as a result, generally also to economic problems. A chain of cause and effect is created, which is shown in simplified form in Figure 2:

The fundamental problem of the chain of cause and effect is the described mixture of waste (waste mix). One consequence of the high organic content is that the entire waste stream has a high moisture content. This makes storage, transport and further processing of the waste more difficult. In addition, waste from Indian cities differs greatly depending on the season (e.g. influence of the monsoon) and also the socio-economic environment, so that the waste characteristics change (Speier 2018).

The following operational risks resulting from the main problems for the operation of waste treatment plants in India:

As a consequence of the chain of causation, there are serious economic and ecological effects:

The procedural effort for waste treatment is increased and the energy requirement and the costs for the treatment increase. By-products that could be marketed profitably with waste separation, on the other hand, must be disposed of in a landfill due to the reduced product quality. As a result, the electricity generated by waste treatment is not competitive.

In India, these problems have been recognized in principle, so that among other things separation of wet and dry waste should be provided for in the future due to new legal framework conditions. We at u&i GmbH think: a step in the right direction! However, it remains to be seen how the requirements will be implemented!

In order to optimize the existing waste-to-energy plants based on the current situation in India, we offer our extensive experience, which we have gained over the past 25 years worldwide. 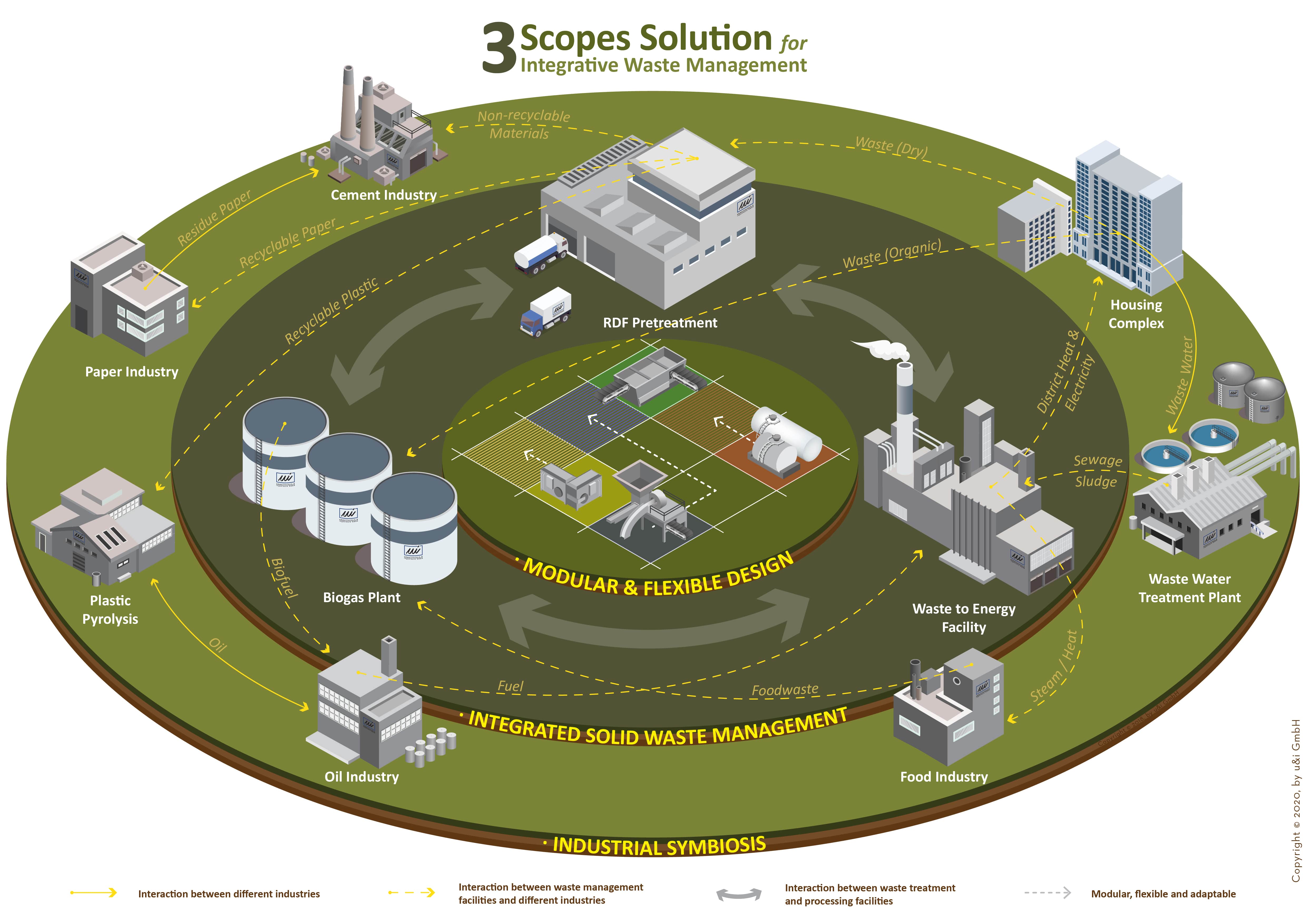 An industrial symbiosis exists when a company creates a by-product (e.g. energy) within a region and makes this available to another company as a resource. This symbiosis benefits both the environment and the economy since logistics routes and the use of fossil (finite) resources are minimized (Karlundborg Industrial Symbiosis Network). Examples can include the use of food waste as feed for farm animals or the use of non-recyclable, combustible waste for energy.

Against this background, a waste treatment plant should not be seen as an individual plant that is built independently on a green field. Rather, consideration should be given to how the facility can be integrated into the region so that different types of waste can be converted into products that can be reused as resources elsewhere in the market. The Indian government took the first step in this direction by promoting the co-processing of refuse-derived fuel (RDF) (in cement plants within a 100 km limit around a plant (CPHEEO, 2018). This use of RDF in the cement industry is likely to slightly reduce some of the current landfill and coal-burning issues, but further links between industries and waste management are required.

Other options for supplying the nearby industry can also be used where e.g. is a need for process steam. For example, chemical, paper and tire factories can use the process steam from a waste-to-energy plant. In many European countries, waste-to-energy plants are therefore operated in industrial areas in order to make the best possible use of synergy effects. For example, we at u&i GmbH have planned an extension of a waste-to-energy plant in an industrial area with corresponding interfaces to steam-reducing companies in their neighbourhood for one of our customers in the Netherlands and supported it during construction.

In addition, the current development in Germany shows that excess heat from combustion processes can be used efficiently to dry sewage sludge or digestate.

Such symbiotic relationships should, however, already be identified in the planning phase in order to reduce costs and to coordinate the procedural processes as best as possible.

We would be happy to assist you in creating concepts to take advantage of synergy effects!

Simple solutions in India's waste management are no longer sufficient to solve the ever-increasing problems of municipal solid waste. It is therefore advisable to combine several suitable treatment methods in order to ensure an appropriate and balanced management of municipal waste. This approach is called Integrated Solid Waste Management (Menikpura et al., 2013). One example is the generation of biogas by anaerobic fermentation of waste combined with the subsequent use of the fuel generated as LPG in households. In this way, fossil gas can be replaced and greenhouse gas emissions can be significantly reduced.

The use of synergies between different processes in a municipal waste treatment plant can improve the possibilities of material and energy recovery from waste. Since waste-to-energy plants have a long lifespan (20 - 30 years) and require enormous investments, the recovery of resources can be seen as an important criterion for the investment. Such process efficiencies are particularly interesting for an integrated waste treatment plant.

Some examples can be:

The integration of different technologies in one location minimizes the entrepreneurial risk and increases the efficiency of the entire location. In this context, we at u&i GmbH have extensive experience in the planning of integrated waste treatment plants. In addition, there is contact with colleges and universities in the region, which are, among other things, involved in research projects which deal with the improved cascading of procedural treatments of bio-waste. (Green Cascade)

We would be happy to assist you in planning your location in order to optimally use the available process technology!

The level of a modular and flexible design

With rapid urbanization, the introduction of new laws and the transition to infrastructure for waste management, India is experiencing continuous change. Such changes occur over a period of 5 - 10 years, but still require a system design that can be flexibly adapted to changing framework conditions. Therefore, the choice of machines and the design of the system should be so modular that continuous improvement, adaptation - but also an expansion of the system is possible.

U&I GmbH worked on various projects in which different resources were combined, processes were coupled and marketable products were manufactured. With the intention of integrating the principles of the circular economy into the waste energy process, we see incineration plants not only as a disposal plant but also as an upcycling plant with maximum efficiency.

We use cookies on our website. Some of them are essential for the operation of the site, while others help us to improve this site and the user experience (tracking cookies). You can decide for yourself whether you want to allow cookies or not. Please note that if you reject them, you may not be able to use all the functionalities of the site.